The Maze of Coercive Control:
The Power & Control Wheel “Grows Up”
FROM MOTHER JUSTICE

As an advocate and educator on domestic violence, I am always looking for memorable ways to visualize and explain the behaviors of an abuser that is most common to the collective victim experience.  I was first introduced to the original Power & Control Wheel (from the Domestic Abuse Intervention Project, Duluth, MN) in 1992, while in the ever-tightening grip of my own abuser.  There were many aspects of that wheel to which I related, and of the 36 behaviors identified, he perpetrated at least 30 of them weekly or daily.  The Wheel was powerful validation for the abuse I had endured, and proof that I was not crazy – or alone. 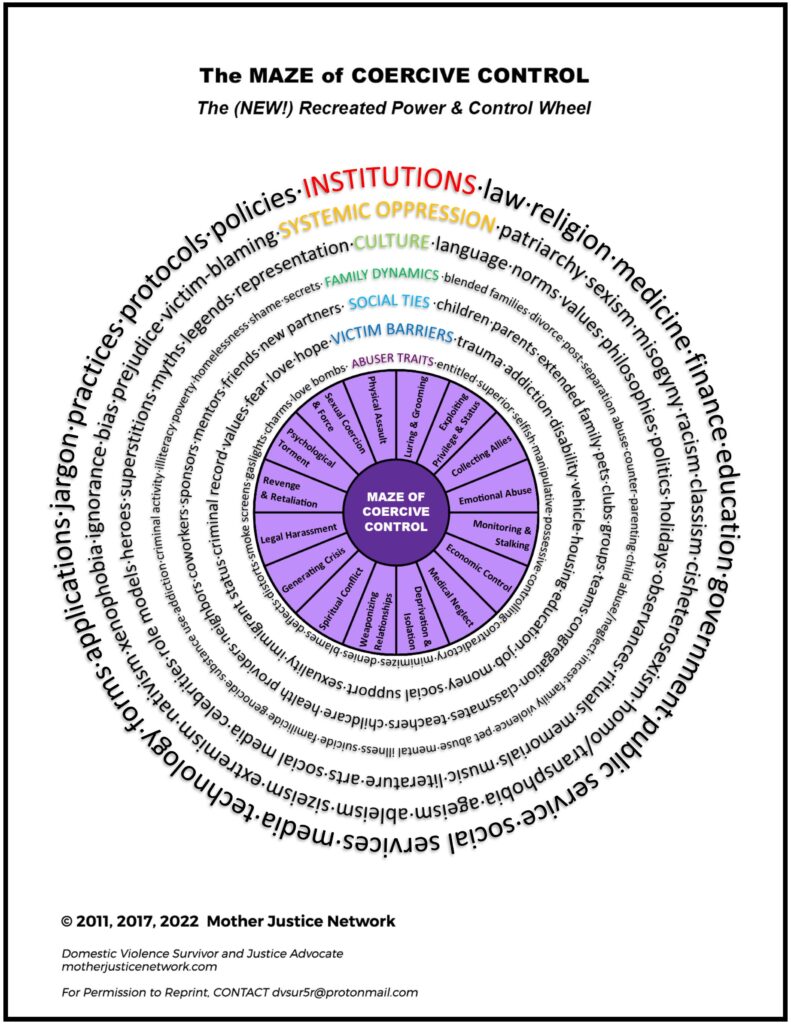 However, even though my abuser was extremely violent towards me physically and sexually, I could not relate to physical and sexual abuse as the factors keeping me in the relationship; they were the behaviors that made me desperate to leave.  After I became an advocate, I found that many of my service-users were also troubled by the Wheel’s “glue” being the physical and sexual abuse.  Although, much like me, they identified being victimized by many forms of non-physical violence, many would see the wheel rim emblazoned with “Physical Violence” and “Sexual Violence,” and would often doubt, minimize or otherwise discount their “other” experiences: “Well, he never hit me, so I must not REALLY be abused.”

It became really important, then, to create tools that demonstrated (especially to the larger community) that “abuse is more than physical.”  So in 2001, I created “Shades of Gray” (renamed–due to the unfortunately-named popular books glorifying an abusive relationship – “Many Faces of Abuse”) an educational tool breaking domestic violence down into multiple categories of abuse: Emotional/ Verbal Abuse, Exploiting Privileged/Male Status, Medical Neglect, Deprivation & Isolation, Economic Control, Monitoring & Stalking, Spiritual Conflict, Legal Harassment, Psychological Torment, Sexual Coercion & Force, and Physical Assault.  This tool was fairly unique at the time, because as a woman of faith, I didn’t hear anyone talking about spiritual abuse in the context of domestic violence, and medical neglect was virtually ignored as an issue (except for elderly victims) in favor of the more common tactic of economic control.

I began visualizing a new Power and Control Wheel using my “Shades of Gray” as the basis for the “spokes,” treating physical and sexual abuse as co-equal to other forms of abuse. Living domestic violence is complex, and messy, and overwhelming.  And there are layers of systems, institutions, communities and individuals giving the victim mixed messages about staying with the abuser or leaving him behind; I wanted to build a tool showing that complexity.  Other influences in creating the Maze of Coercive Control included:

Each layer of the wheel is “incomplete,” as it is not possible, with the limits of page size and computer program, to enumerate ALL of the factors that go into each layer (for example, “Systemic Oppression” is missing “victim blaming,” and “police brutality”).  But each should have enough examples to allow the viewer to mentally add in their own, making the wheel illustrative of their individual experience.

For permission to reprint this tool, please contact Mother Justice at [email protected].

The Maze of Coercive Control has been used under permission at these websites (click SOURCE to view):